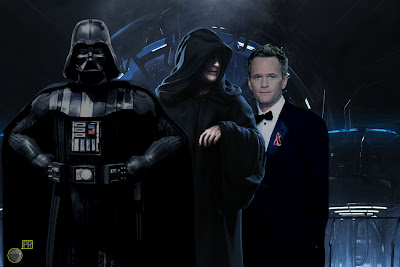 We're just going to come straight out and say it. We like you. Just enough for you to be flattered by the fact that we think you're cool and maybe want to grab dinner and a movie with us sometime, so we have things to talk but only for a finite period of time in case it doesn't go well, but not enough to be creepy. Okay, no. You know what? We could never lie to you, NPH. You deserve better than that. We like you like Jabba the Hutt loves slave girls and dropping people in Rancor pits, which is to say, a lot, probably. We're never sure what he's talking about. Not like you, NPH. You're so ridiculously talented, what with your singing and acting and dancing and what not, you probably speak Huttese and a minimum of 47 other alien languages. We love that about you.

Of course, we appreciate that you're so much more than just a living compendium of knowledge on alien languages. You're also a consummate entertainer and a master magician (without even using the Force, too! Wow. Your versatility continually blows us away, NPH!) and probably the universe's second best dad, right after Darth Vader.

"Get to the point, evil PR Team!" we imagine we hear you say. Fair point, Neil. That's another thing we love about you in our imaginary conversations. You always cut to the very heart of the matter, like a conversation doctor with a fetish for cardiothoracic surgery. "That's no nonsense Neil for you." That's what we always say for the first time just now. Anyway, the point being:

We need a star for the Death Star. A celebrity spokesperson to help spread Death Star PR, and the Galactic Empire's, message of love, peace, tolerance, and blowing up other people's planets if they don't agree with us. And we want it to be you. Join us and together we can rule the galaxy as PR Team and Son.

"But why should I help the Galactic Empire?" we imagine we hear you ask. Great imaginary question, NPH. You're like the Olympic Gold Medallist of Astute Imaginary Question Asking, except better, because you'd never make a huge deal about being such an amazing imaginary question asker. No sir. That's not the Neil Patrick Harris way. If we know Neil Patrick Harris, which we don't, he isn't about boasting, he's about fashionable scarfs and hosting the CRAP out of awards ceremonies.

To answer your question that you didn't ask, there are a whole bunch of reasons why you should, nay, MUST help us, NPH. You are going to be absolutely flabbergasted by how much you have in common with an evil galaxy-spanning totalitarian regime. Flabbergasted!


Firstly, you were a boy genius doctor, which can only mean one thing: you must have an incredibly high Midi-chlorian count, just like Darth Vader. Except instead of using your amazing Force powers to win the Boonta Eve Classic pod race (which you undoubtedly could have done, be tee dubs - we believe in you, NPH!), you chose to use your godlike powers to help the sick and slowly type pithy moral codas in to your computerised diary. And if you think about it, aren't they the same thing, really?

Secondly, you and Darth Vader both love to use the catchphrase, "SUIT UP!" Did you know that, NPH? You probably did, on account of you being a precocious child genius and Hollywood megastar. The only slight difference between Vader and yourself being that you're typically referring to a slim-fitted two-button purple pinstripe Prada suit, whilst the boss is snuggling into a heavily armoured 120kg black durasteel mobile life-support suit. Wow! Talk about being two peas in a pod made entirely of incredibly fashionable suits, NPH!

Of course, it almost goes without saying that you've had plenty of experience actually being an evil mastermind yourself during your time as Dr. Horrible. Probably we would have preferred a little more building of giant doomsday devices and fractionally less singing and accidental murdering of the always delightful Felicia Day, but hey, to each his own. Who's to say whether musicals or destroying planets is truly more evil, right NPH? What? No, of COURSE it's musicals, have you even seen GLE-- never mind. Agree to disagree on that one, Neil Patrick Harris. 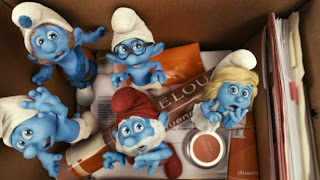 Finally, your recent work in The Smurfs showed the universe that you aren't above working for the occasional soul-destroying, mostly computer generated, toy merchandise-driven evil regime. Admittedly the Smurfs haven't attempted to murder any Jedi Knights yet, or take over the galaxy through a series of carefully orchestrated space, or "Star" wars, but you can tell just by looking into their murderous eyes that it's only a matter of time. Seriously, what are they hiding underneath those hats, Neil Patrick Harris? WHAT ARE THEY HIDING UNDER THE HATS?!

Plus, if it helps you feel at home, we even have a blue guy working for us! Okay, unfortunately he's somewhere in the Unknown Regions right now, BUT you can at least call Emperor Palpatine "Papa"! He loves it. Errr... you're not particularly lightning conductive are you, NPH? Oh, and PS Neil Patrick Harris, don't let anybody tell you that you weren't great in that movie. It was, as always, a NPH acting tour de Force!

So what do you need to do, NPH? It's simple. Retweet this letter. Share it with your friends and loved ones. Put it under your pillow at night and dream little Death Star dreams. Talk to your bigtime Hollywood movie friends about how we can make a fair and balanced new version of the Star Wars films starring you in the role you were born to play: all of them. Oh, and maybe put in a good word to Cobie Smulders for us. Do you think she's into evil totalitarian regimes that build 160km in diameter monolithic death cannons? And for Force sake, tell Ted to get his act together and get to the bit about actually meeting the mother, dammit.

In return, we'll pay you $20 million Galactic Credits (Currency may not be a form of legal tender in your galaxy), you'll bask in the glory and adoration of being the galaxy's most popular celebrity spokesperson, feel the  glow of self-satisfaction and inner peace that comes from helping an evil Empire in need,. and we'll save a spot on the Death Star for when we finally get around to destroying your planet.

Help us, NPH. You're our only Neil Patrick Hope.

PS. We made you this poster as a token of our appreciation. Feel free to put it up in your room or have it turned into a giant back tattoo, whichever is easiest. 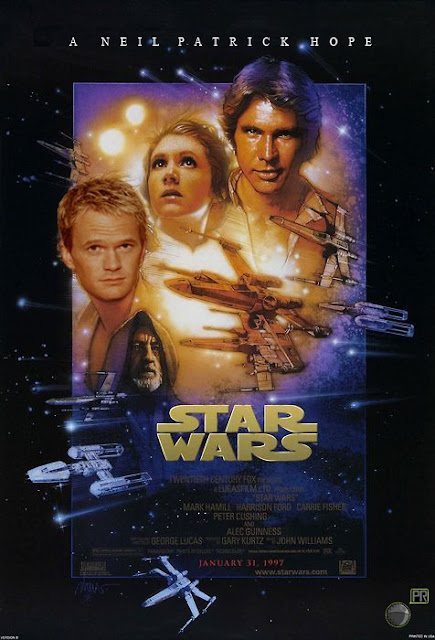 Why not read some of our other patented open letters to TIME Magazine, Google, beloved Academy Award winning Hollywood Actress Natalie Portman and the Pentagon?
Posted by Robbie Boland at 3:02 AM