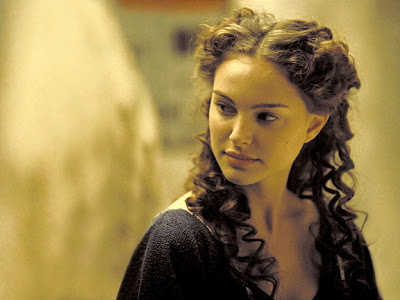 Our warmest congratulations to you on the birth of your son. You've begun the journey of a lifetime, filled with laughter, love, crazy highs and even a few terrifying lows. And to show you just how much everyone here in the Galactic Empire cares, we decided to write you with some parenting tips to help guide you through it all.

You seem like an incredibly intelligent young lady. We read you have a Bachelor's Degree in Psychology from Harvard University. Good for you, Natalie. And you did that all while undertaking an incredibly successful acting career? Wow. What an achievement. Your son should follow in your footsteps. Immerse him in the world of books and academia, or even, if you must, let him act. But keep him safe, Natalie. If he ever seems interested in adrenalin-fueled activities, or, say, expresses a desire to be some kind of space fighter pilot, just say no. But in a really motherly way that doesn't make him want to rebel against you and do it anyway (this is where that psychology degree will come in very handy).

Give him freedom (Yes, it's a balancing act, but if anyone can manage it, it's the Academy Award winning actress who gave a tour de force performance in Black Swan). If he wants to go to Tosche Station to pick up some power converters, let him. Where's the harm in that? It might even prevent him from keeping out of trouble/meeting a stalkery old hobo who will guide him down a path that will lead to the tragic deaths of his caretakers (i.e. you) by rogue Sand People, and the eventual explosion of some 1.3 million government employees.

Encourage him to make friends. We're sure you'll agree that good friends last a lifetime. But help him steer clear of making friends with the wrong people. Sure, that lovably ragtag, yet pluckily rebellious bunch of kids might seem cute at first, but it's scientifically proven that they'll grow up to be douchy space pirates, stroppy princesses and aggressive bears who cheat at board games. Are those really the sort of friends you want for your beloved son? We didn't think so.

This is a sensitive subject, Natalie, but we need to talk to you about Magic powers. Does the idea of your son moving things with the power of his mind, or enslaving lesser people's minds to his will sound good? Well it's not. He'll never get out of bed to do his chores, he'll always win at Jenga and you'll always end up eating whatever he wants for dinner. Think about what an insufferable jerk this kid will turn out to be. That's not the Natalie Portman way. Plus, he'll be trained by strange cave-dwelling old magicians who lie about everything and crazy old swamp goblins who can't even string a grammatically correct sentence together. And that's definitely not the Natalie Portman way.

You are incredibly beautiful but we're sure you'll agree, the most beautiful thing of all is a great personality. Teach him to love and value other people, no matter what walk of life they're from, be it black, white, or planet destroying Sith Lord. Help him to understand that violence is never the answer and war, be it of the Star variety or otherwise, only begets more war.

So if he wants to go bullseye womp rats in his T-16 back home, say "No womp rat bullseyeing for you today, sonny Jim. Think of the poor womp rat family that will be devastated by the loss of Mr. Womp Rat when he doesn't come home from work. Mrs. Womp Rat will be totally inconsolable and never quite the same again and the children will grow up without a male role model, leading to lifetime of substance abuse, making a living on the Womp Rat pole. Do you really want that hanging over your head for the rest of your life? DO YOU?!"

And if he ever has a sister, watch those two Natalie. Watch them like a hawk with cybernetically enhanced vison wearing binoculars watches that sexy lady hawk undressing several city blocks away through her window. Never, ever separate them for an extended period of time during which you neglect to constantly remind them that they are brother and sister, because terrible things will happen. Dark, terrible, unnatural things. Trust us Natalie, you don't want the specifics. Just take our word for it.

Good luck to you, Natalie. May the Force be with you and your newborn son.


P.S. Thank you for not having twins... or is that EXACTLY WHAT YOU WANT US TO THINK?
Posted by Robbie Boland at 1:54 PM