How to: Beat Up Chewbacca 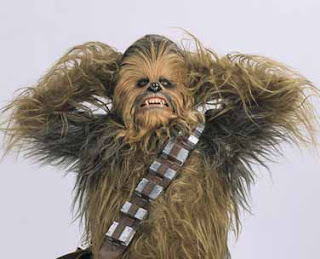 So the inevitable has finally happened: you've decided you need to beat up, maim or possibly kill Chewbacca. Maybe you caught him humping the couch one too many times, or growling suggestively at your girlfriend, or perhaps you just thought his pelt would make a fine throw rug for the living room.

Regardless, you're in for the fight of a lifetime, because fighting Chewbacca is exactly like fighting a grizzly bear. A grizzly bear that has the ability to understand everything you say, strategic know-how to play space chess and fly a spaceship, the strength and desire to rip off your arms at will, and a laser gun.

Step one: get your affairs in order. Finish writing that crappy novel you subconsciously never intended to show anyone, kiss the wife and call your children into the study for one last awkward hug before telling them to run along now and turning stoically to peer out the window as a single tear runs into your moustache. Because make no mistake, if you do not follow this guide precisely, you are going to die in a horrible, horrible way.

Step two: join the Rebellion. Getting in is easy - just don't bathe for a week or so, then say things like, "Shyeah, Emperor POOPatine more like it! Amiright, you guys?" during the interview. (NOTE: Avoid overly rigorous high-fiving at this point, as you will need to conserve as much energy as possible for the fight to come)

Next, ingratiate yourself with Han. Stage a meet cute with Han where you "accidentally" run into him in the hangar bay, ending by complimenting him on his brave fashion choice of always wearing tights everywhere. Before you know it, you'll be sharing beers and listening to his stories of the "Good old days" of drug smuggling and murdering people in bars.

While you're becoming Han's best friend, bearly (GET IT?!) acknowledge Chewie, except to make jokes at his expense or get his name continually slightly wrong. Do this for five years until he gets incredibly angry and/or seems about to tear you to pieces, whichever comes first. NOTE: If you let yourself get torn to pieces, YOU'VE DONE IT WRONG. Come back with cyborg body parts and try again, and this time, for the love of God, PAY ATTENTION.

At this point, Chewie hates you. He thinks you're the biggest douchebag in the Galaxy, which is really saying something because he spends a lot of time with Han. Admit it. Tell Chewbacca you've been a dick. Say things like, "Just because you look like a walking carpet doesn't mean I should walk all over you." Maybe even cry a little (NOTE: DON'T LET ON that they are actually tears of happiness because your plan is about to come to fruition). Explain that you want to make it up to him by meeting for some one on bear time at the local Sports and Recreation Centre.

IMPORTANT NOTE RE: VENUE: At this point, Chewbacca might suggest meeting in a forest instead. DON'T DO IT. "But I can use the trees for cover and I did orienteering once in high school and I can use the numerous sticks and stones as rudimentary weapons if I need to", we hear you say. WRONG. The forest gives the space bear the home ground advantage. Fighting Chewbacca in a forest is like fighting a fat kid in a cupcake store, in that it gives them both magical powers, or something. Chewbacca will KICK YOUR ASS IN A FOREST. Sheez. With that kind of thinking you'd be driving home without any arms before you knew it. Thank god you're reading this guide instead of trying to come up with this plan by yourself. You should pay us money for saving your ass. 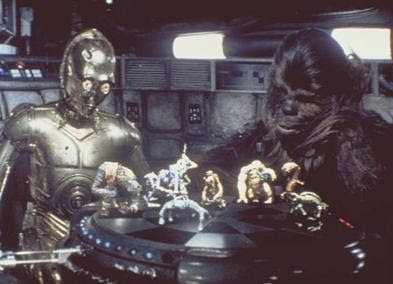 Meet at the Recreation Centre. Invite him to play a game of space chess but LET THE WOOKIEE WIN. Firstly, if he happens to see your fingers shaking with adrenalin or notices your steely-eyed glare of bear-killing determination, he'll just think you're being competitive. Secondly, Chewbacca will be so smug about his victory that he'll be open to whatever you suggest next.

Incredibly casually suggest a pleasant sunlit stroll outside near the pool. As you walk, distract him with your extensive knowledge of bearkind to really make him feel like you're working hard at this friendship thing, e.g. "Did you know that some male bears weigh in at over 450kg, can climb trees, and run at speeds of over 30 km/h? Or that Fozzie Bear has mauled seven puppeteers and at least one overly inquisitive journalist to death?"

By now you should be next to the swimming pool, duck pond or other large body of water (preferably filled with giant killer sharks that you have spent several years building a rapport with that will telepathically respond to your commands).

Laugh with gusto as you turn to Chewie, holding out your hand. Say, "You know what? I was wrong about you. You're alright, big fella."


Wait for it.
Here it comes.
The second he takes your hand, KICK HIM IN THE NUTS AND PUSH HIM IN TO THE WATER. Within seconds he'll be pulled down by the weight of his own luxurious, incredibly wet, luxurious mane of hair.


Well done, you magnificent bastard. You just defeated the most feared bear in the Galaxy in glorious, valiant single combat.


Of course, if this tactic doesn't appeal to you, you could just kill him Yuuzhan Vong-style, by dropping a moon on him.
Posted by Robbie Boland at 2:49 PM

Email ThisBlogThis!Share to TwitterShare to FacebookShare to Pinterest
Labels: Chewbacca, Death Star PR, Deathstarpr, Han Solo, How to Beat Up Chewbacca, How to Guide, Star Wars