Darth Vader: Behind the Mask 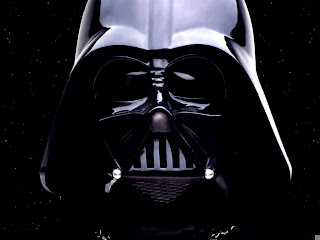 Darth Vader: you know him as the Dark Lord of the Sith, He-Who-Brought-Balance-to-the-Force, Twitter royalty, hero to billions and perhaps the greatest icon of our time. But what is the man behind the mask behind the legend really like?
Death Star PR finds out.
DSPR: Lord Vader, thank you for taking the time to talk to us, we understand that you’re a very busy man.
DV: You may dispense with the pleasantries, PR lackey. I’ve just traced the rebels to their hidden base on Hoth. My skivvies are warming in the dryer as we speak. Fire away (no pun intended) before the buzzer sounds.

DSPR: You’ve taken to Twitter like a Jedi to failing. What do you enjoy most about interacting with your legions of fans?
DV: The chance to strike fear into the hearts of the denizens of this backwater little world one-on-one. There really is nothing like force-choking someone via a 140 character text message. The marriage proposals are nice too.

DSPR: Your fans number over 200,000. What do you put your popularity down to?
DV: I like to think it’s my unwavering commitment to the Dark Side, but the ladies know the real reason. The black leather, the heavy breathing, my command of the Force. I have these things in evil spades and they’re the same reason that girl you liked so much in high school didn’t give you the time of day. She was pining for Fonzie, while you were busy being Richie Cunningham.

DSPR: When you’re not tweeting or killing people how do you spend your time?
DV: I search the galaxy for my whiny-ass son, make back-room deals with turncoat scoundrels and do the occasional voice over work for CNN and TomTom to pay the bills.

DSPR: For some strange reason, some people seem to think of you as a bad guy. How do you respond to that kind of negativity?
DV: Just because I slaughtered all those Sand People and younglings people seem to think I’m this big baddie. Let me just say for the record they all had it coming, especially those lackey admirals that litter the floor around the Death Star cafeteria. It’s so hard to find good help these days.

DSPR: What do you think is the biggest misconception people have about you?
DV: People seem to think I do what I do out of anger, and let’s be honest, a lot of it I do. But what I’m really all about is simply bringing order to a chaotic galaxy. You have to have rules or society degenerates into a bunch of Mon Calamari with boom boxes on your lawn at 3am. All I’m doing is keeping the squid in their place, try and remember that.

DSPR: This question’s from Jake, 12, on Bespin, who asks, “What’s it like being the 2 I.C. of the Galactic Empire?”
DV: It’s pretty cushy, Jake. I get to work my own hours, hunt down Jedi dogs for fun and intimidate entire plants, like yours, into submission. Hope you’re enjoying the new tax on those Bespin Burgers I levied. Your dad just paid to have my cape cleaned and pressed. How does that feel?
DSPR: You wear so many hats, or should we say “helmets”. What aspect of your job do you enjoy the most?
DV: The inescapable fact that people love everything that comes out of my asthmatic mouth. Even the simplest words such as “What?!”, “Sister!” and my all-time favorite “NOOOooooooooo!” become legendary. It’s good to be me.

DSPR: What advice would you give to any young people out there with a dream in their eye and evil in their heart hoping to follow in your footsteps?
DV: Start small, a journey of a thousand dead rebels begins with one step. Bully a school mate into giving you his lunch money or take your friend’s football and go home. Work your way up by downloading songs and movies off bittorrent and before you know it, you’ll be my new Dark Apprentice.

DSPR: As someone who is an inspiration to others, who, or what, inspires you?
DV: Truth be told, Obi Wan used to inspire me a great deal. He was my master after all. I learned a great deal from him before he got all soft and holier than thou. I really didn’t blink a scarred eye when I sent him to join the Force. Nowadays I get lots of inspiration from this planet’s so-called ‘entertainment’. Between the Twilight saga and Jersey Shore there’s no shortage of evil in the world.

DSPR: Being the most powerful Force user in the Galaxy must be great. What’s the most fun thing you’ve used or abused the Force for?
DV: Mind tricks never get old. Let’s just say I never have to wait in lines at restaurants, sporting events or major theme parks. I’m like one big, evil Fast Pass.

DSPR: You’ve led a very full life. Any regrets?
DV: Just that whole force choking and accidentally killing Padmé thing. If I could go back, that entire incident could have gone a lot better I think. Yeah.

DSPR: Finally, tell us something about Darth Vader that most people wouldn’t know.
DV: Evil skivvies dry faster than normal. My shuttle awaits, and your time is up. This has been a pleasure and an honour for you, I know.
DSPR: That goes without saying, my Lord, but just in case not saying it would result in a Force Choke - it’s been a pleasure and an honour chatting with you, Lord Vader. Thank you for your time.
Posted by Robbie Boland at 4:36 PM