An Open Letter to Google re: the "Fictionality" of Darth Vader and Emperor Palpatine 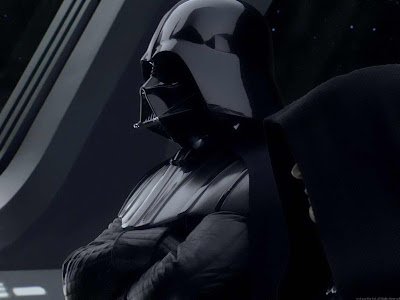 Dear Goo,
Can we call you that, Google? You seem like the type of innovative multinational IT-based corporation who is playful, easygoing and enjoys a good nickname. We're writing to you because over the weekend you made a horrible mistake, Goo. You suspended Darth Vader and Emperor Palpatine's Google+ accounts because you believed them to be "fictional" characters. We find your lack of faith disturbing.
You can’t just arbitrarily decide to cancel a REAL PERSON’S social networking page without even telling them about it or giving them an opportunity to defend themselves first. That's not fair. It’s not like blowing up a planet, after all.
You know Goo, for some reason a lot of people (like TIME Magazine) have called Darth Vader "fictional", despite the fact that he's been in SIX BIOGRAPHICAL MOVIES AND A TELEVISION SHOW, plus countless books, comics and video games. You can find replicas of him in almost EVERY TOY STORE ON EARTH. Does that really sound like a "fictional" character to you?
What does it even mean to be "fictional" in this day and age of carefully constructed public personas, plastic surgery and media manipulation? Don't we all choose to represent ourselves in different ways to those around us, changing chameleon-like to suit our context? Do any of us really even know the "real" us? Do you know the real Gyougle, Goo? Aren't we all just "fictional" characters in the end? As Shakespeare once said, "All the world's a stage, and all the men and women merely players."
What happened to you, Goo? Who hurt you? Did you unexpectedly have your heart broken by a really Hot Young Lady Search Engine who left you for a more brooding, buffer, Bad Boy Search Engine in Search Engine High School, thus making it difficult for you to trust others? Because we'll be honest, you seem to be constantly searching for something. Something you won't find by tearing down the happiness of others, just to make them as miserable as you feel.
Should they just LIE and change their names to Dan Vader and Eugene Palpatine instead (as suggested by Scott Oldfield)? Is that what you want? Do you really want to create an online culture based on lies, where people regularly pretend to be somebody they're not? What a horrible world that would be to live in.
Maybe it's discrimination. Maybe you don't want Darth Vader and the Emperor to have an account on your precious little social network just because your slogan is "Don't be evil" and they're "evil wizards" who "took over the Galaxy" and "murdered" millions of people. Because if you're going to use "evil" as the basis for your decisions, then we can probably all agree that you'd better start by cancelling Dane Cook's account first.
On that note, how is it that the FRIGGING Hogwarts Sorting Hat, SEVERAL Lord Voldemorts AND Chewbacca still have their Google+ Profiles? Answer us that, Google. Oh, that's right, you can't, because you're a corporation. Did you know that makes YOU a fictional entity of sorts too? No, you probably don't, because you don't even have a brain or a mouth.
Or could it be that you have something against Sith Lords? Is that it, Google? We thought people had moved beyond religious discrimination in this day and age, except against the Jedi, which is totally acceptable. Doesn't your informal corporate culture extend to people who enjoy wearing a plush velour robe to work and who have different belief systems to your own that involve frying the very occasional subordinate with Force lightning? For shame, Goo. For shame. Is that really the Google we've bonded with and come to think of as a good, nay GREAT, friend during the countless hours we've spent searching the web for funny videos of people hurting themselves? Of course it's not. Don't be that search engine, Goo
Perhaps it's just that your recent affiliation with Androids has led you to be prejudiced against cyborgs. Don't get us wrong, androids have their place. Usually that place is poncing about in a black and gold unitard and wanting to become human. But can't you see that cyborgs are people too, Google? Well, mostly human. Okay, AT LEAST 42% human.
Finally, if you can't find it in your cybernetic heart to be swayed by the infallible logic and wild accusations contained above, then we're afraid we're going to have to bring out the big gun: litigation. We hate to bring up the whole copyright issue but the truth is, you owe a LOT of your success to us. Clearly the idea for Google+'s "Circles" comes from Darth Vader's classic line, "The circle is complete." 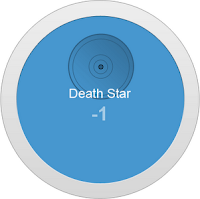 Does this "Circle" look familiar to you, Google?
And don't even get us started on Google Chrome... 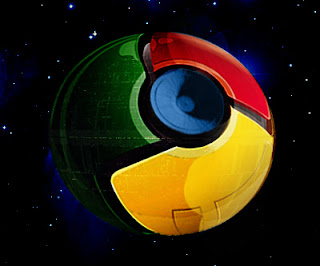 So finally, Google, remember that the Force surrounds us, binds us, and can also be used to Force choke us from great distances if we get on the wrong people's bad side. Isn't it funny that "Google" even sounds a LOT like "Gurgle", the last thing most people say when they're being lovingly throat hugged from across the room by a caring Sith Lord? What a strange coincidence that is, right Gurgle Google? Haha. Ahaha. Oh, we have such fun together, don't we Goo?
We trust this will help you make the right decision and restore Darth Vader and Emperor Palpatine's Google+ accounts immediately. Otherwise you might find your planet becoming "fictional" by the weekend.
Warmest regards,
The Death Star PR Team.
Posted by Robbie Boland at 4:30 PM