Darth Didn't Do It 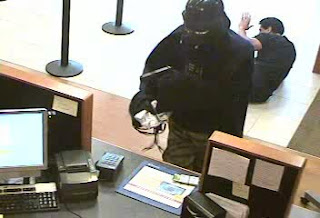 Earth "news" outlets have flooded the Death Star switchboard today with questions, comments and accusations about a recent bank robbery in Setauket, Long Island. Photos taken during the robbery show the bank being held up by a man dressed as Darth Vader.

The Galactic Empire categorically and emphatically denies Lord Vader's involvement in the alleged robbery and quite frankly, we find these allegations offensive. Several reliable witnesses can confirm that at the time of the robbery, Darth Vader was busy brutally murdering a Jedi cell in a galaxy far, far away.

It is clear from the alleged bank robber's attire alone that he is not the real Darth Vader. Everyone knows that Lord Vader dresses exclusively in slimming black, whilst the robber's cloak is blue. Not to mention the camouflage pants, which are an absolute fashion faux pas, as they do not compliment Vader's stylish chest respirator in any way. 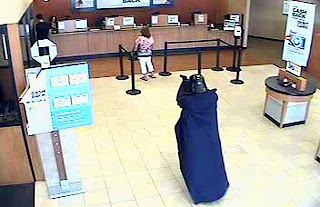 Keen observers may also notice a distinct lack of Darth Vader's trademark lightsaber-related dismemberment or death in the footage. Darth Vader has not, and would never, use a pistol. His cyborg fingers are far too fat to fit inside the trigger guard.

Finally, we would like to take this opportunity to point out to the intellectually challenged citizens of Earth that accusing a magically-powered cyborg killing machine who lives in a moon-sized laser capable of destroying your planet may be extremely injurious to your health.

Photos and story found here.
Posted by Robbie Boland at 7:39 AM