Normally we're in the business of destroying planets, so today's news presents us with something of a conflict of interest. Earth astronomers have discovered the darkest planet known, a planet made of midnight, cloaked in shadow, blacker even than the blackest of hearts. 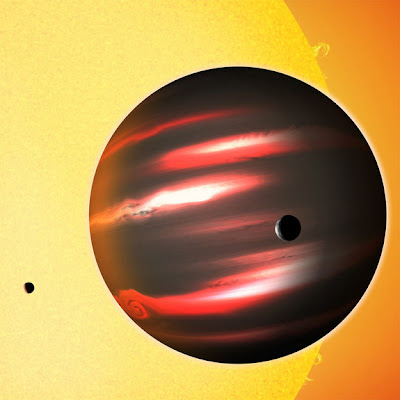 The planet TrES-2b, a gas giant some 750 million light years away, is so dark that it reflects back less than 1% (0.01) of the light from its nearby star. As NPR's report states, "That means the planet is blacker than coal. Seen from space, TrES-2b would barely be visible."

As yet, there is no clear explanation as to what makes TrES-2b so dark, though it could be its close proximity to its star, or even, as co-discoverer David Kipping has speculated, due to the presence of a previously unknown chemical.

On Earth, at least. Poor, pathetic Earth scientists. You haven't even invented real lightsabers yet, it's no wonder you can't figure this one out. As usual, it falls to the benevolent Galactic Empire to explain things to you and help you understand how REAL science works.

You see, WE made "Planet Vader" (as it shall be known from now on). Right after Padmé died of totally natural causes, a young Darth Vader was not quite as happy to have been turned into a bachelor and a kick ass evil cyborg as one might expect. In fact, he was a bit depressed. Okay, he was a LOT depressed. The guy cried ALL the frigging time. He cried whenever he heard Celine Dion songs on the radio and wrote a lot of horrible, horrible poetry. Like, HEAPS. Poetry so bad it made Vogon poetry seem like Shakespearean sonnets.

So Emperor Palpatine found the planet responsible for relaying the Celine Dion songs, set the giant laser to 'Extra Crispy' and dedicated the "new" planet to his best bro.

Once Vader got after the post traumatic stress-induced night terrors of being taken to another molten hot planet, he was actually quite appreciative of the gesture.

Story via NPR. (Tip via Dr. Rubidium)
Posted by Robbie Boland at 6:59 AM