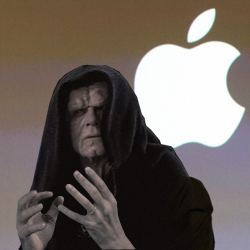 It was announced this week that Apple now has more money than the US Government. As its financial woes continue, the US Treasury's cash balance fell below $US74 billion, dropping below Apple's cash store of $US76 billion. But what does this actually mean? The answer is clear: Steve Jobs is building the Galactic iMpire on Earth.


Early days
Like most powerful wizards, Steve Jobs was orphaned at an early age. He was raised in California, a desert, by adoptive parents who never told him his true parents were actually still alive, or that he had a sister. He dropped out of college after only one semester in the early 1970's and began work for Atari, assumedly building annoying protocol droids from junk parts. He then travelled to India and became a Buddhist (Brown robes? Check. Impossible ethical standards? Check. Junk about being one with everything? Check.)

Rise to power
But how does a college drop out become ruler of a planet-wide evil Empire from such humble beginnings? We know that Jobs took his first step down the dark path when he cheated his partner, Steve Wozniak, out of $2150 in an early deal with Atari, before they founded Apple Computers together. Having had his first bite of the Apple taste of the Dark Side, Jobs began a Machiavellian rise to the top of the computing game, using a convoluted plan involving purchasing Pixar (previously owned by none other than Lucasfilm) and some incredibly boring stuff about space taxation. 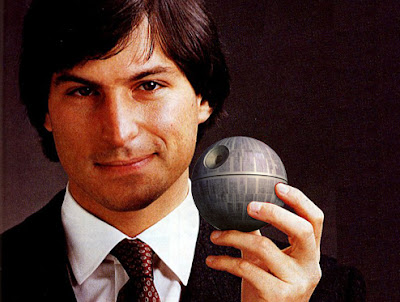 Even in his youth, Steve Jobs reached for the Death Stars.
iMperor of Apple
After a hiatus from Apple to work on other evil projects, Jobs returned as CEO, turning it into one of the most successful IT companies in the world. One of his first acts as CEO was to make it impossible for anyone to make Macintosh Clones, thus ostensibly ending the Clone Wars. However, behind his public persona as a charismatic, highly persuasive leader was an aggressive and demanding personality who caused widespread fear amongst his employees by Order 66'ing many of them. With no one to stand in his way, Jobs triumphantly announced himself undisputed iMperor of Apple at the 2000 Macworld Expo.

Personal fortune
As well as holding more than 5 million shares in Apple, Jobs sold Pixar to Disney (an evil corporation whose sole reason for existence is to take as much money from small children and their parents as possible) in exchange for becoming its largest individual shareholder, with a whopping 7% (almost 6% more than anyone else).

Power... UNLIMITED POWER!!!
Now with wealth and power beyond measure, Jobs was finally free to begin turning people to the Dark Side in earnest. His devices were temptingly attractive, seductively powerful and incredibly easy to use, but they also came at a high price, in that they literally cost a crapload of money. Most importantly of all, short battery life, inability to synch with anything except that one specific version of iTunes you have on your old computer and antenna issues caused countless many consumers to give in to their anger in violent fits of rage. 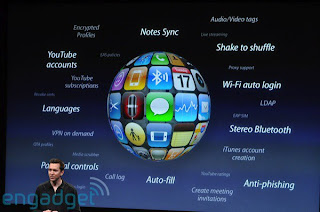 Look familiar?
An Apprentice and an army
A Sith Lord is nothing without his apprentice to kill off the competition and iMperor Jobs was no different, yet he was not content with one black-clad evil magic cyborg to do his bidding. Instead, Jobs made millions, and an army of familiarly white-and-black armoured iMperial troopers to go along with them. Together, they conquered the world. 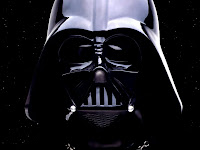 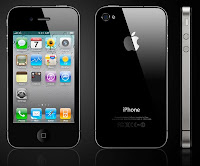 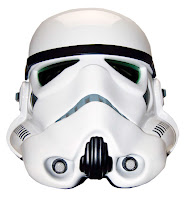 Health "concerns"
More recently, Jobs' appearance changed dramatically and he appeared to be suffering from health concerns supposedly caused by "cancer". The reality was so much simpler: through countless years of study, dedication and the occasional cold blooded murder, Jobs had mastered the arts of the Dark Side. 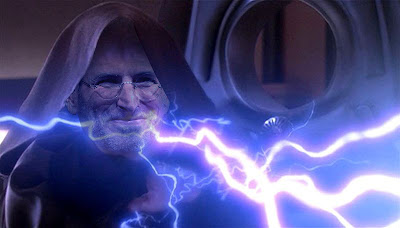 It's now only a matter of time before his patented "Stevenotes" become even more exciting.
Building an iDeath Star
Of course, no Galactic iMpire would be complete without building a Death Star and iMperor Jobs has already taken the first steps towards ensuring the iDeath Star's construction. Apple's proposed circular "spaceship" headquarters in Cupertino, California, is undoubtedly the skeleton for a spherical moon-sized doomsday laser that will one day be used to blow up planets and ensure that iMperial rule lasts forever. 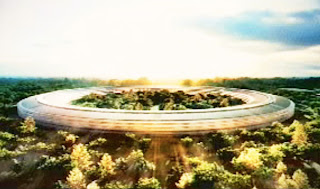 And so it begins.
So enjoy your freedom while it lasts, Earth. It's only a matter of time now before iMperor Jobs rules you all with a sleek, feature-packed next generation iRon Fist (v.4).


The Galappletic iMpire: Think Sitherent.
Posted by Robbie Boland at 8:23 AM