Sithmas Greetings from the Empire

Sithmas is a magical time of year in the Galaxy far, far away. It's snowing outside, which is great for temporarily hiding/preserving bodies, and inside, families gather around a blazing hearth to exchange gifts, eat roast Ewok and pretend not to hate each other.
To celebrate the very murdery festive season, Death Star PR asks Twitter's, and the Galaxy's, leading Imperials to share their thoughts on Sithmas [Click their name to go to the Twitter feed. If you aren't following them all, you're wasting your life. Well, wasting it more.] 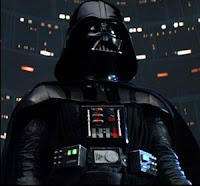 Depressed Darth
Who gives the best Sithmas gifts?
One year, Lord Palpatine gave me a framed picture of Alderaan exploding.  It was a nice sentiment and even though I threw him down that shaft; I sometimes miss him around the holidays.  Another year, General Grievous gave me a Swedish massage.  You haven’t relaxed until you’ve gotten a massage from a four handed Sith robot.

What is the true meaning of Sithmas?
People usually say spending time with your family, but my relationship with my family is a little strained, so I’d say it’s more about getting out there and spreading the Sithmas spirit.  I like to sing Sithmas carols.  My favorite that always pleases my boss goes like this:
Here comes Sidious
Here comes Sidious
Right down Sidious lane.
Lightsabers beaming, Jedi screaming
Don’t stop us or put up a fight
So follow your fear, the dark side is near
Cause Darth is comin tonight!

How do you celebrate Sithmas?
I like to decorate my apartment by hanging red and green lightsabers from all of the Jedi I’ve killed.  I’ll usually have a plump holiday Ewok roasting in the oven that goes great with some mint jelly.  Nothing says Sithmas like the thought of slain Jedi and the smell of roasted Ewok.

What's your secret Sithmas wish?
That some evil regime, possibly Iran or North Korea, decides to build a giant moon-sized super weapon and wants to hire someone to run the operations up there.  I have a lot of experience and they always say you learn more from failure than from success.

Sithmas Greetings Message:
Thank you all for being so bad this year, we’ve been watching.  We didn’t make a list or check it twice, but we’ve got probe droids, so we know where you live.

Lord Palpatine
Who gives the best Sithmas gifts?
Well, it's not Tarkin. Let's just say he keeps forgetting that not all of us are into shaved Ewoks.
If Vader gives me one more framed photo of him and Padmé, I'm going to have to choke a bi... Oh wait, he already took care of that.
A little known fact about me is that I give gifts to all the children in the Empire. Drums, to be precise. The parents hates it.
What is the true meaning of Sithmas?
The true meaning of Sithmas is spending time with your family, by the Death Star view ports, watching a planet blow up. In fact, forget about the family.
How do you celebrate Sithmas?
Planet-sized fireworks are a tradition, of course. My favorite thing to do on Sithmas is waking up in the morning, sneaking downstairs and electrocuting Bantha Claus as he tries to fly down the Death Star Exhaust port.
Sithmas Message to all of your loyal subjects:
Be unto others as you would have been if you knew nobody would find out about it. 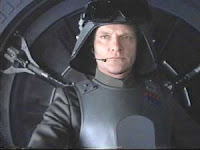 General Veers
What's the true meaning of Sithmas?
The true meaning of this wonderful holiday is that it's better to take rather than to give. For example as you are reading this, I have been slowly removing your wallet from your back pocket.


How do you celebrate Sithmas?
It all starts with picking the best Endor tree from the forest and then properly removing the pesky Ewok habitat from it. Then I decorate it by hanging an array of blue, green, and purple lightsabers on the tree. These can easily be attained by killing a Jedi or just by telling them that a woman wants to talk to them. They will become so frightened that they drop their weapon and run out of there as fast as Ackbar at a sushi restaurant.
Then there are the obligations like the annual work party. It’s very dull though, the clones seem adamant on talking about the same topic over and over again. Just dreadful. I got lucky last year for presents though. You see, I drew Luke and Vader’s names from the hat and only needed to buy 1 pair of gloves to complete the gift. Anyways, there’s the free AT-AT rides for the kids, that’s always fun. This year, I had to attach a plow to the back to make a little more money since they said I couldn’t give Sithmas backrubs as bonuses for female officers.
Finally, it’s a tradition on Sithmas Eve to leave out Aloe Vera cookies and prune juice on the fireplace for Vader and the Emperor respectively.
What's your secret Sithmas wish?
An increase in Imperial Management Force chokes (the only proper way to move up the ladder in this company), Stormtroopers that can aim, and more women. I mean at this point I would just take dudes with long hair… what? Uhm… nevermind.

Admiral Daala
Who gives the best Sithmas gifts?
Grand Moff Tarkin of course!!  He offered me another Star Destroyer this year but it's not like I'll ever need more than 4, right?
What is the true meaning of Sithmas?
Sithmas is a special time of year to help the Imperial economy by spending credits on a Vader bobble head or donating to the Death Star Fund, which helps to convert nonbelievers into understanding the true reason for the season by blowing up their planet.

Sithmas Greetings Message:
My friends,
We are living in a galaxy where Sithmas exists to better our societies; we don't need Jedi to sort out our differences and mete out justice.  This Sithmas we remember our citizens whose lives have been disrupted by the irrational acts of the Jedi.  As your Chief of State I promise to not let these things go unpunished.  This Sithmas we stand with you and your families and promise to make these rogues stand trial for their crimes. That is the true meaning of Sithmas and we will not rest until that meaning is fulfilled.
Thank you for your time,
Galactic Alliance Chief of State Natasi Daala 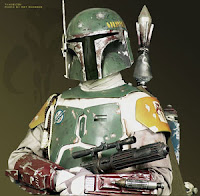 Boba Fett
Who gives the best Sithmas gifts?
Ewoks. They're so cute, kind and giving. They also taste great with BBQ sauce and a side of fries, while their fur can be used for Snuggies blankets. Ewoks: the gift that keeps on giving!
How do you celebrate Sithmas?
Jabba has an annual Sithmas function on his sail barge where  he "invites" those who have been naughty (haven't repaid or are behind in paying their financial loans to Jabba) to "enjoy" Sithmas with him. They then disembark the sail barge, where they re-enact the birth of The Emperor on a collapsible stage above the Sarlacc Pit. It's truly a touching tribute.
What's your secret Sithmas wish?
To include a sub-section clause which includes Ewoks in the Prime Directive of Order 66.
Sithmas Greetings Message:
Give to those who are less fortunate in life. Unless they're part of the Rebel Alliance. Then take down their details and give me a call. 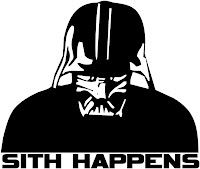 Sith Sarcasm
Who gives the best Sithmas gifts?
The Jawas. They are the slaves of Bantha Claus building toys and droids for Sithlings across the galaxy from their factory on Hoth.
How do you celebrate Sithmas?
With lots of Ewok Nog and our favourite carols: "We Wish you a Merry Sithmas", "Frosty the Snow Wampa", "Joy To The Empire", "Sith Rest Ye Merry Stormtroopers", and "Darth Maul The Red-Faced Sith Lord."
Sithmas Greetings Message:
Bantha Claus is going to be putting lots of coal in your stocking this year, but only after you were sent to the Spice Mines of Kessel to dig it up yourself.

And, finally, from us here at Death Star PR:
"HAVE A VERY MURDERY SITHMAS, EVERYONE!'
Posted by Robbie Boland at 2:10 PM