Here in the Death Star's PR Department, we field thousands of inquiries every day. Most of them are questions like, "Why are you doing this to me?" (We're doing it to everyone, quit being selfish) or, "How does it feel to be responsible for the deaths of billions of people?" (It always feels good and very grown up to be responsible for things).

But we also field more important questions like today's query from Flynn, 14, on Naboo, who asks, "What magazines does Darth Vader Sithscribe to?"

We posed the question to the Dark Lord of the Sith himself, Twitter's Darth Vader, who replied:

Unlike some evil despots who choose to seal themselves away in a media Force bubble, I like to stay apprised of the goings on within the Empire. I don't actually *read* the magazines I subscribe to, but the lackey who dictates them to me does a great job, especially with the sex quizzes and crossword puzzles. I'm looking forward to the day, very soon, when these periodicals are available as downloadable cu-mags (chest unit magazines) so I can get the digest version downloaded directly to my brain. Unfortunately when that happens my dictation lackey will be out of a job, and probably her life. C'est la Sith.

Here are the four magazines the Dictation Lackey assures us are Darth Vader's current favourites (click to enlarge): 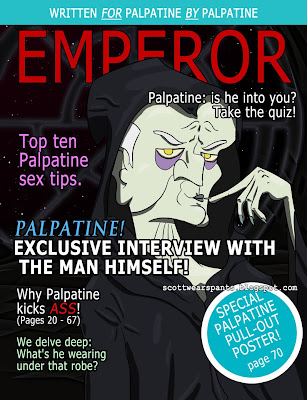 A favourite not only of Darth Vader but of all the staff on the Death Star.
Which has nothing whatsoever to do with the fact that Emperor Palpatine would destroy us with Force lightning if we said otherwise. 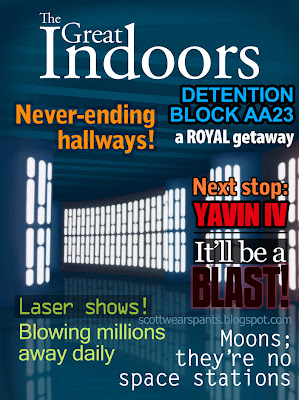 The Death Star is a big place. Finding your way around, as well as keeping tabs on all the latest goings on, used to be tough. Not anymore. 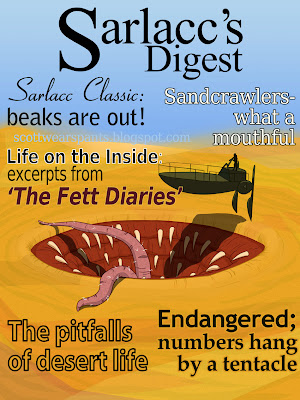 ﻿For some unknown reason the boss has always had a fondness of/extreme hatred for Tatooine. 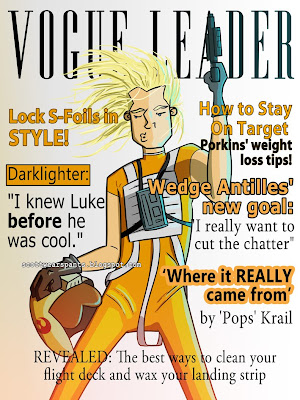 To know your enemy's fashion trends is to know oneself.
﻿
These Star Wars magazine covers were created by sickeningly talented artist Scott Morton.
You can find them and loads of other great artwork at: http://scottwearspants.blogspot.com/
Posted by Robbie Boland at 5:08 PM