In our ongoing mission to bring truth and light (of the really bright green variety) to an otherwise dark galaxy, the Death Star's PR team continue our weekly review of episodes of Star Wars: The Clone Wars.


Episode 1x02: "Rising Malevolence"
Moral: "Belief is not a matter of choice, but of conviction."
Actual Message: "It's okay to do disobey orders if you think your reasons are good enough."
The Seperatists have a new secret weapon. The Jedi Council send Master Platoon Plow Koon Button Eyes Predator Face to investigate. 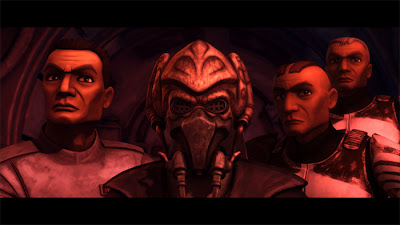 Using all of his amazing Jedi precognitive and empathic powers, Master B.E.P.F. guides his ships straight into a Seperatist "trap", which here means "floating in space a very obvious way, making sure to have a red sun in the background so as to be particularly easy to spot". 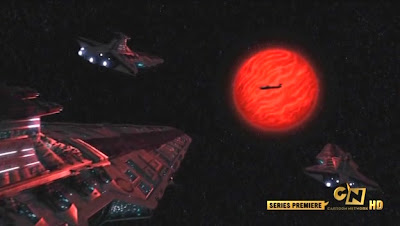 Count Dooku and General Grievous fire the new superweapon, destroying the Republic's fleet and forcing the survivors to employ Standard Jedi Emergency Protocol #1: When in doubt, run away and hide out!

Very perceptively, and using all of their great knowledge of the Force, the Council think everyone is dead. Skywalker's skimpily dressed sassy Padawan Ahsoka Tano thinks there could be survivors, and she isn't afraid to sassily tell the Council. They wisely ignore her. In classic Anakin style, he then gives her a lecture about following orders, before promptly ignoring them himself and going to investigate.

While Anakin, Ahsoka and ubiquitous droid sidekick R2-D2 search the debris for survivors, Master Plutonium and three of his clone soldier friends encounter a group of droids who just want to talk/throw them into the vacuum of space. However, Master Protein & co. have a surprise in store for the poor droids and throw themselves into space first, presumably so they can put their lives in the maximum amount of jeopardy possible.


Apparently one handy Jedi ability is the power to survive the sudden decompression, lack of oxygen and extreme cold for extended period of time without a suit or any kind of breathing apparatus.

Improbably surviving the improbable space shoot out, Master Potpourri and friends are rescued by Anakin and Ahsoka just in time to put them in more danger when Grievous returns in his flagship and superweapon, the Malevolence. It fires on them but due to some fancy flying on Anakin's part, the Jedi narrowly escape, once again bravely fleeing another battle.

Overall, a fun episode with some excellent action, with Skywalker's final escape from the ion cannon's blast being a particularly high point.

Posted by Robbie Boland at 8:47 PM