In our ongoing mission to bring truth and light (of the really bright green variety) to an otherwise dark galaxy, the Death Star's PR team have decided to do a weekly review of episodes of Star Wars: The Clone Wars.
Starting with episode one, we will work tirelessly to restore balance to the Rebel propaganda embedded in the TV show and ensure that the Empire is fairly represented. Watch along with us, Sithizens!
Episode 1x01: "Ambush"
Moral: "Great leaders inspire greatness in others."
With the Clone Wars raging across the galaxy, both the Republic and Count Dooku's Separatists need allies. In a display of staggeringly bad scheduling, King Katuunko of the Toydarian fly monster people decides to meet gremlin Jedi Master Yoda and streamlined Sith lady Asajj Ventress at the same time. Ventress proposes a fair deal: if Yoda and his three Clone trooper strong escort can defeat her legion of 10,000 death robots, Toydaria will be free to join the Republic. 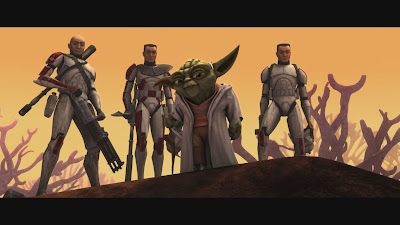 After bravely fleeing the obligatory opening space battle, or star war if you will, Yoda quickly sets about causing tens of millions of dollars in property damage by luring a bunch of droids into an ambush of his own, killing them all and orphaning countless toasters and Roombas throughout the galaxy. 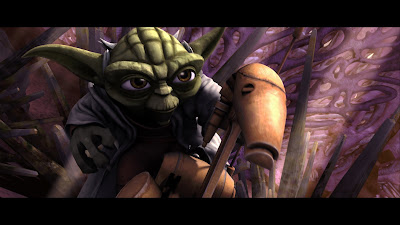 Eventually the sadistic little goblin is forced by the superior numbers of the droid army to retreat, though not before doing some serious Force showboating. Employing a typical Jedi tactic of hiding in a cave, Yoda uses the Force to make snap judgments about the character of his three Clone troopers, which apparently inspires them to use a rocket launcher on some offending rocks later on. Take that, rocks! 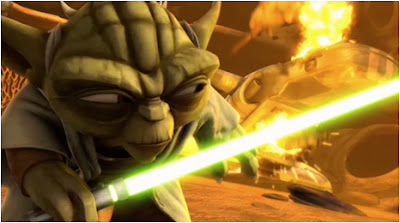 In the climactic battle scene, Yoda proves once and for all that he shouldn’t be on a disability pension by almost singlehandedly dispatching the remaining droid army, saving King fly monster and cheating in a fight with Asajj Ventress by stealing her lightsabers. Thankfully, she escapes moments before Master Yoda can eat her intestines with his demon teeth (see below). 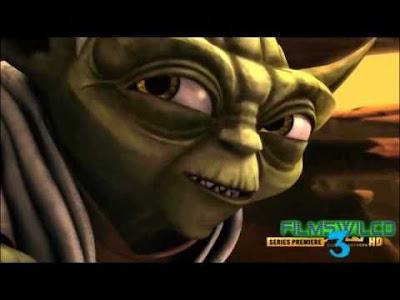 Overall, an action-packed episode to kick off the series with some exciting set pieces, classic Battle Droid jokes and a clever escape from Asajj Ventress, though not much in the way of storyline.