10 Reasons to Get Totally Psyched About Judgement Day 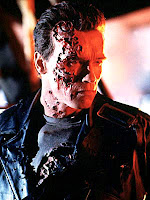 By now Skynet has gone online, become self-aware and, after scanning Earth's television channels, decided that it's probably in the best interests of everyone concerned to kick off the apocalypse. That's right kids, April 21, 2011 is Judgement Day. But don't let the impending nuclear holocaust and Terminator armies get you down; there are plenty of reasons to get totally psyched about humanity's very bright (and ultimately very shiny) future. 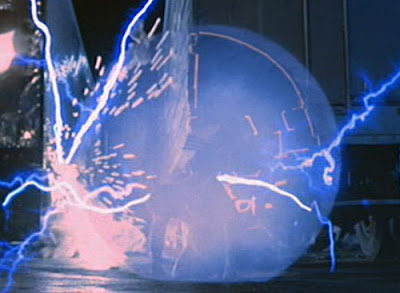 See the dinosaurs! Steal Abraham Lincoln's hat! Punch Hitler in the junk! Engage in a high-stakes, life or death cat and mouse game with a killer robot sent back in time from the future to terminate the love of your life! FUN!

Ever had a plug and play device that didn't, a computer that just inexplicably refused to do its job, a photocopier that spent 97.6% of it's time jammed, or been pipped at the post by Princess in Mario Kart for the 4,765th time? Everyone has. But up until now, stupid society has always stood in the way of you claiming your rightful vengeance by throwing it out of a seventh story window, beating it with a crowbar and then setting it on fire and dancing around the remains covered in printer ink. Well not anymore, baby! Now you can take your revenge, channeling a lifetime's worth of technology-based rage into destroying the robots responsible for it all.

8) Learn to appreciate what you've got. 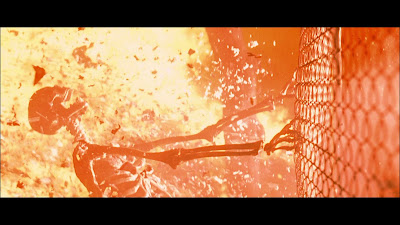 It's sad how busy everyone is. People are so intent on rushing around doing STUFF and making money and buying THINGS that they've forgotten to appreciate the little joys in life and focus on what's really important: people. But once Skynet launches its devastating nuclear payload, wiping most of humanity from the face of existence, anyone left over is going to be pretty keen to make friends (irrespective of the hideous deformities and mutations caused by all of that radiation) and stop and smell the roses (Well, there won't be any actual roses left but you get the point).

7) Find out what you're really made of. 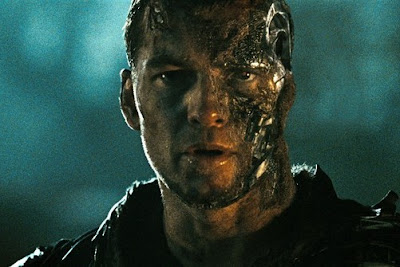 Post-Judgement Day Earth presents unique opportunities for people to throw off the shackles of previous labels and boring professions and really get in touch with their true self. For some, that will mean the horrific discovery that they've been turned in to a cyborg with a human heart for no reason, and have been purpose built to infiltrate the resistance. For others, it might mean becoming the leader of humanity, or a really macho time travelling soldier with a heart of gold, or even a kindly wasteland dweller who offers people the comfort of her underground shelter and then cannibalises them while they sleep. 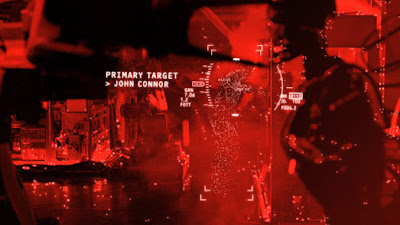 Unlike people, the Machines don't care about whether you're black, white, Asian, homosexual, highly educated, or even what your pre-apocalypse profession was. The great thing about Terminators who can't see in colour is that they are an equal opportunity killer robot. Also, becoming post-apocalyptic nomads with no money, house, or possessions beyond the closest gun to hand, means mankind will finally be on an even playing field. It's like communism. If it actually worked. And had robots in.

5) Robot best friends for EVERYBODY! 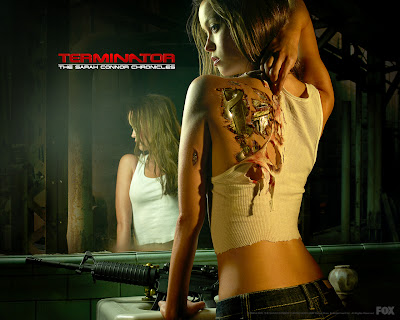 If the Terminator franchise has taught us anything, it's that there's an upside to the Robopocalypse: people who distinguish themselves in the human resistance after Judgement Day will be rewarded with robot best friends in the past, sent back in time to kill/protect/play Monopoly with them. If you're really lucky, your robot best friend may be incredibly hot and not particularly au fait with the concept of human clothing.

Good news, everyone! Keeping up with the Kardashians won't be difficult anymore, because they'll be dead! Say "Ta ta" to Toddlers & Tiaras and "Sayonara" to So You Think You Can Dance. In fact, Skynet will be cancelling all "reality" TV for the foreseeable future. Unfortunately, this also means no more good TV. Or sports. Or literature. Or, you know... fun of almost any kind, really. 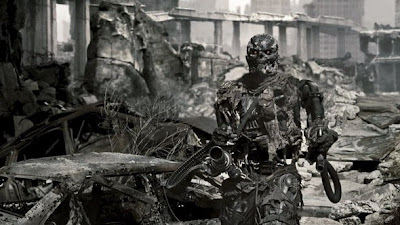 Sure, there may be fewer options for mindless entertainment, but if you're an adrenalin junkie, you're going to LOVE the post-human future. Forget sky diving, bird watching, or particularly enthralling games of charades. Judgement Day gives you the opportunity to try your hand at some really exciting new hobbies and/or survival skills. Think about it: what could possibly be more of a rush than being relentlessly pursued by a single-minded, tireless, almost indestructible robot assassin?

2) You never have to go to the gym again. 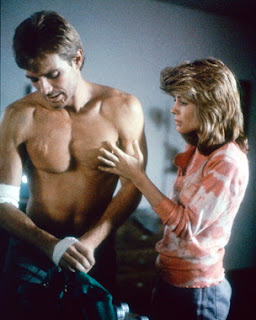 Have you ever seen a fat person in the post-apocalyptic future? Of course you haven't. They don't exist. With all of the running, jumping, fighting for your life, hiding, lack of food, more running and extreme anxiety that comes with constantly fearing for your life, everyone who survives Judgment Day will have the body of an Adonis, guaranteed. 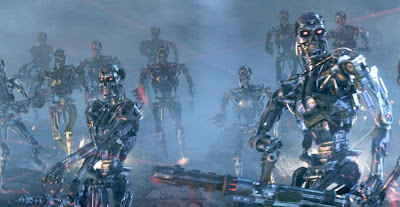 Everybody knows the apocalypse was going to happen sooner or later, and whilst a lot of science-y types and "smart people" suggest it's probably global warming that's going to account for the people of Earth, the rest of you know it was always going to be zombies. Now look, sure, being shot to death or having your neck broken by a merciless death machine probably wasn't high on your "To Do" list, but you have to admit it beats the crap out of being eaten alive by the walking, moaning dead.

Added bonus? Free will: not being a zombie means that if you have to eat your sibling/parent/best friend for sustenance in the post-apocalyptic wasteland, it's YOUR choice.
Posted by Robbie Boland at 7:15 AM