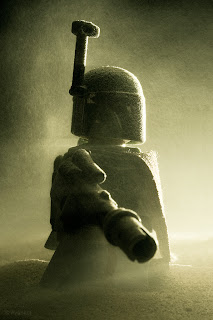 
Honourable Mentions and Winner after the jump.

Eric Geller said...
The only bounty that Boba Fett ever failed to collect was on himself.

talon84 said...
Underneath Fett's Helmet is another blaster.

Dantric said...
Bobba Fett's milkshake brings all the Twi'lek's to the yard.

ceolaf said...
Everyone loves Boba Fett, and he always knew.

Jared said...
There is a reason it's called a 'fett'ish.

Cutestkidsmom said...
The Second Death Star exploded after unconfirmed rumors that Boba Fett had been eaten by the Sarlacc..... Even it did not want to live in a universe where Boba Fett was dead.

Jeremy said...
After Boba Fett flew out of the Sarlacc, he didn't even call her the next day.

Brad said...
Boba Fett's favorite movie is The Notebook. Did you just laugh at that? Of course you didn't. You're still alive.

djc said...
It was once said that Boba Fett was a minor character in Star Wars. That was also the last time it was said.

But there can only be one winner. And that winner is...

Posted by Robbie Boland at 4:58 PM