A Death Star For America 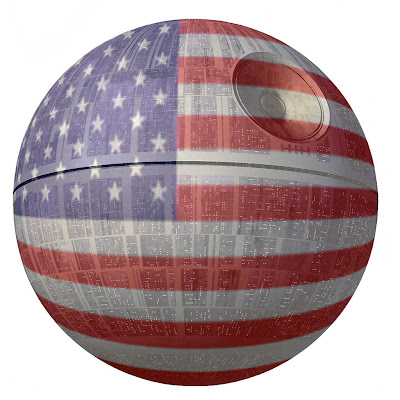 It is a dark time for the United States of America. It's no secret that the once-great nation of America is in trouble. On August 2nd, the US will reach its debt ceiling of $14.3tn and be unable to borrow more money. The results of defaulting on this debt for America, and Earth's economy, could be catastrophic, leading to the collapse of the global money market. Plus, the AT-AT for America campaign got canned.

But this isn't the first time this has happened, friends. Allow us, if we may, to tell you a little story from a long time ago in a galaxy far, far away. The Galactic Senate's incompetence, employment of Jar Jar Binks, investment in protracted wars and spending on big government had brought the Republic to the brink of chaos. But one man had a dream. A dream of streamlined government, of job security for all and, most importantly, of peace in our time.

As Emperor, Palpatine cut government spending and increased efficiency by 2,000% by firing (sometimes literally) all of the other politicians and installing himself as ruler of a totalitarian dictatorship. With the valiant Darth Vader at his side, Palpatine ended the Clone Wars by bravely ordering the Jedi be assassinated, then brought the troop home. All 60,000 of him. But most importantly of all, friends, he gave the Galaxy a symbol of hope. He gave them a shining green light in the darkness. He gave them the Death Star.

That's right, friends, the solution to America's problems is simple: build your own Death Star.

Friends, the Death Star for America Project will need strong leadership. Someone with great charisma, a "take no prisoners/kill anybody who disagrees with you" and preferably the ability to shoot lightning from their hands. This leader, let's call them "Emperor Palpatine" for the sake of argument, will make the tough decisions that no democratically elected parliament ever could, and in 1/10th the amount of time. Some might call it having no "rights" or "freedoms" or "say". We like to think of it as "streamlining your political options".

Constructing a Death Star will see the end of unemployment on your planet once and for all. Assembling a 160km-across moon-sized battlestation armed with a planet-destroying superlaser will require a lifetime of commitment from virtually every man and woman on Earth. Also children, whose small hands are excellent for cleaning the difficult-to-reach parts in broken machinery.

Similarly, your exacting schedule and challenging working conditions will save you countless trillions of dollars by ensuring that the need for aged care pensions and welfare payouts will disappear completely.

Once you've begun building your Death Star, your money woes will become a thing of the past, friends. You won't need to borrow any. In fact, you won't even need to pay any of what you owe back. People from other countries will generously give you money, completely of their own free will, because you'll be building a giant death laser capable of disintegrating them from space, which may or may not need to be test fired a couple of times on non-compliant countries.

Environmental concerns won't be an issue either, as what little of the planet is left after you've stripped it of all of its precious metals and other essential resources will barely classify as an environment. Hey, let's be honest, it's not like your current politicians or big businesses were planning on doing any different.

Warfare will be no more. The Death Star for America Project will inspire humanity's imagination in a way no human endeavour ever has before. The people of Earth will realise that you can do more than shoot for the stars: you can build a star that shoots planets. This, plus uniting people under the common goal of not being exploded from space, will make other nations flock to support your glorious cause.

There will be those who tell you it cannot be done, friends. Ignore them. They will pay the price for their lack of vision. Did Emperor Palpatine listen to people when they said, "You're crazy", or, "How did we not know that you're an evil megalomaniacal wizard intent on taking over the Galaxy", or, "Ohgodohgod, please don't blow up my planet"? No. No he did not. He built his Death Star and so can you, America.

Don't go quietly into the night, friends. If you want to save America, spread the word to all of your friends. Direct people to this page. Get inspired. Let the Galactic Empire be your guiding (Death) Star.


Oh, one more thing, friends; you're going to need a new flag. We call it "The Death Star-Spangled Banner". 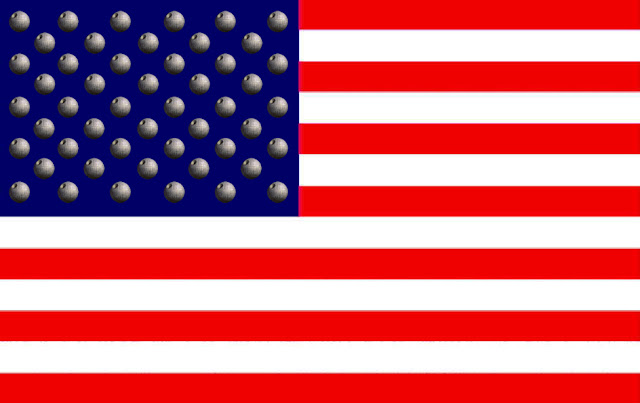 You're welcome, America.
Posted by Robbie Boland at 2:00 PM