A is for Ackbar

"A is for Ackbar" is the ridiculously adorkable Star Wars-themed alphabet created and illustrated by Brandon and Emma Peat for their new son, Tycho. Death Star PR recently caught up with Brandon to delve in to the creative process behind the project. And to find out why "D" doesn't stand for "Death Star". 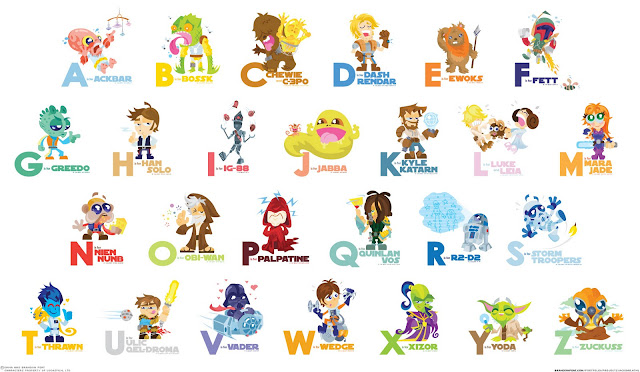 DSPR: What made you and Emma decide on the Star Wars mythos as your inspiration?
When we first found out that we were pregnant, it was a little scary. It was definitely a surprise, and we weren’t sure we’d be up to the challenge. Since we are both artists, my wife Emma thought that illustrating a children’s alphabet together would be the perfect way for us to not only prepare Tycho’s room for his arrival, but to prepare ourselves mentally as well. After some initial creative head-butting (inevitable when two artists are working together!), the project ended up being very cathartic for both of us. 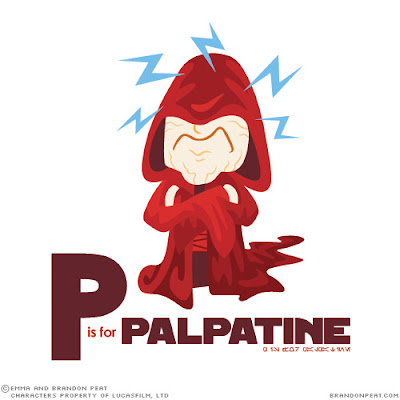 As far as choosing what to depict with this alphabet, Star Wars characters quickly rose to the top of the list.  We both love it, it’s fairly kid-friendly, and there’s definitely enough material in that universe to cover every letter easily, so we wouldn’t have to stretch when it came time for the tricky letters like Q, X, or Z. And I will definitely want to introduce our children to Star Wars as soon as possible, so this seemed like a kid-friendly first step.

DSPR: Jar Jar is nowhere to be seen. Why the decision to go with characters from the Expanded Universe, rather than the prequel trilogy?
I'll spare you my usual tirade and simply say that the Prequels are not my favorite part of Star Wars, and certainly not something I'll be exposing our kids to anytime soon. And dismissing the Prequels and new Clone Wars stuff as being "for kids" ignores, I think, the fact that they're really inappropriate for kids. As Darth Vader, Anakin does some truly evil stuff, and even as Anakin he's not that great of a role model. Would you expose your kid to a show called The Adventures of Young Hitler? I certainly don't want to teach my kids that mass murder is totally okay as long as you have a deathbed conversion. (Taking things a little too seriously? Sure. But you get where I'm coming from.)

DSPR: We don't, that's exactly how everyone in the PR office was planning on going out, but we digress. Please continue. 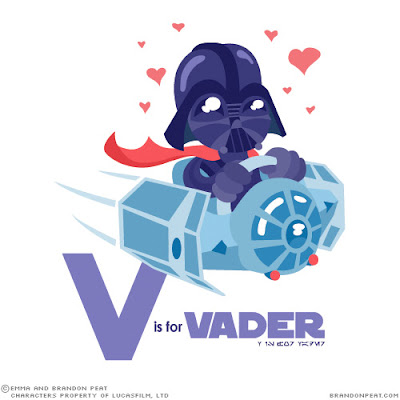 The Expanded Universe, however, is probably my favorite thing about Star Wars – the fact that there’s something interesting around every corner in this universe. My favorite EU stories (the Thrawn trilogy, the X-wing book and game series, the Jedi Knight series of games, the Tales of the Jedi comics and KOTOR games, the Republic Commando game and books) I cherish as much, possibly even more than the Original Trilogy. Sure, those movies are great, but you can’t watch them over and over forever. It’s more fun to experience new adventures within that world.

DSPR: Which characters were the most fun and/or most challenging to design?
My favorite characters to design were the ones where I got to squeeze in a visual gag about the character’s personality or a relevant plot point. Ackbar is scared of his trap-like Star Destroyer mobile. Assassin droid IG-88 is juggling a variety of grenades. Kyle Katarn is holding his lightsaber and the Death Star plans he helped steal. Quinlan Vos is spinning a Sith Holocron on his finger, referencing his brushes with the Dark Side. Boba Fett is jetpacking away from a Sarlacc-looking hole of squirming worms.  Han and Greedo are shooting finger guns at each other… and Han shot first. 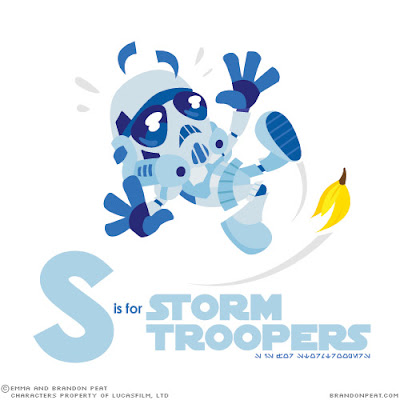 DSPR: Finally, how much would it cost us to get you to change "R" to "Rebel Scum"?
Haha, if you're interested in a custom letter (or any other illustration or design work, for that matter), you can always contact me for an estimate at brandonpeat.com.  I'm always up for a fun project! 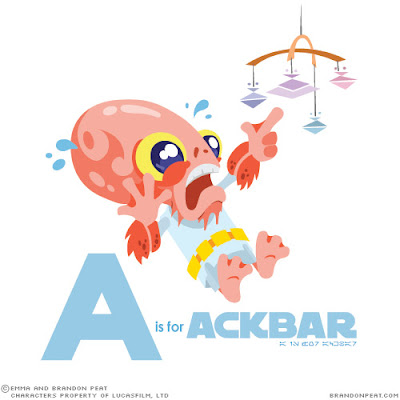 All artwork courtesy of Emma and Brandon Peat. To see the full "A is for Ackbar" collection in all of its glory, or to purchase some of the ludicrously talented Brandon's work/services, visit his website now!
Posted by Robbie Boland at 3:33 PM