Emperor Palpatine: Behind the Lightning

Lord Palpatine: you know him as the benevolent ruler of the Galactic Empire, a man who works tirelessly for the happiness and security of every citizen. Death Star PR goes behind the Force lightning in an exclusive one-on-one interview with the charismatic leader, visionary and self-made Galaxy-trotting playboy trillionaire. 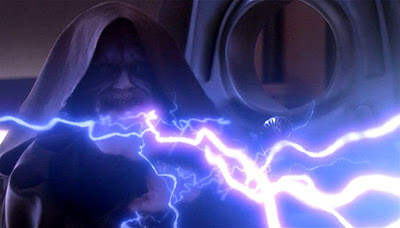 DSPR: Emperor Palpatine, thank you very much for taking the time out of your busy schedule to chat with us.
EP: I needed a break from Vader's moaning. There's a limit to how many times even I can hear the name "Padmé" in one day without electrocuting someone.

DSPR: You've come a long way since Naboo. To what do you ascribe your success?
EP: Hard work, grit, electrocutions and a few cases of throwing people from high places.

DSPR: Having achieved so much in such a short space of time, what are you proudest of?
EP: I once beat Lord Vader in a game of mini golf. Every moment you make a Sith Lord cry is a moment to be proud of.

DSPR: Some people have described the Empire as "an oppressive and ruthless totalitarian government". How would you respond to that kind of criticism?
EP: Give me the name of the planet they reside on, and I will answer them personally with one swift stroke.

DSPR: One of your first totally legal and Senate-supported actions was to pass Order 66 and rid the Galaxy of the Jedi menace. Why did you feel so strongly about that issue?
EP: You said it yourself, the Jedi were a menace to  me our galaxy. Let's face it, they represented a system that just didn't work. I mean, the old Republic allowed for Jar-Jar Binks to be acting Senator. How could I *not* act against that?

DSPR: You make a good point. As we speak, there are Rebel insurgents working to sabotage everything you've created. What would you say to them if you could?
EP: Sending them a message would be pointless, they are blind to anything but their own way. Unable to adapt to a new, richer, way of life. To anyone considering joining the Rebels, I have one thing to say: Alderaan.

DSPR: It's a lot of people's dream to work with their best friend and heterosexual life partner. What's it really like working with Darth Vader?
EP: If you had asked me 11 years ago, I would have said we have a great working relationship, where I lay the plans and he executes them. But now... let's just say I'm glad I installed a mute button on his chest plate.

DSPR: A lot of independently wealthy visionaries seem to be building secret base/doomsday weapons these days. What inspired you to build the Death Star?
EP: The Death Star was built out of necessity. We needed it to protect our way of life. To spread the word of unity and peace throughout the galaxy. Look at your lawn. Do you kill the weeds? Of course you do, because it doesn't blend well with the rest of the garden. The Death Star is our weed killer.

DSPR: A lot of people don't know much about the Force. Can you tell us about some of the perks of the Dark Side?
EP: As I have said before, being in tune with the Force, and particularly the Dark Side, saves you a ton on electricity bills. Another benefit is that people will agree with you no matter what you say, even when they don't know it themselves.

DSPR: Phillip, 14, from Coruscant asks, "What's a typical day for you like?"
EP: It involves a lot of throne chair revolving and hand clapping.


DSPR: Phillip is just one of countless legions of fans. For all your young fans out there dreaming of the chance to work with you, what do you look for in an apprentice?
EP: S/he must be easily manipulated, weak minded and/or mentally vulnerable. There's a reason I'm currently on Earth. So many to choose from. Now let me explain, the reason they have to be weak minded is *not* that I can't break down the strong ones, but it's simply to save time. Once they're broken down completely, we can build the apprentice from the ground up, in my image.

DSPR: Ingenious, my Lord. Your name is synonomous with things like "Death Star", "maniacal laughter" and "Force lightning" but there's so much more to Lord Palpatine. Tell us a bit about the real you.
EP: What most people don't know about me is that I have a very big heart. I keep it in a jar. In addition to that I like history. That's why I spend some time here on Earth watching what they call "Star Wars". I like to call it "Emperor Palpatine, or how I learned to stop wasting time and start loving the Death Star."

DSPR: Emperor Palpatine, thank you for your time and not using the Force to destroy us.
EP: There's still time for that.