In an effort to get on the good side of the Dark Side, the folks at Crave, the social marketplace for fans of anything collectible, have given the PR Team an awesome Star Wars Original Trilogy Collection Boba Fett 12" Action Figure to give away to one of our lucky fans. 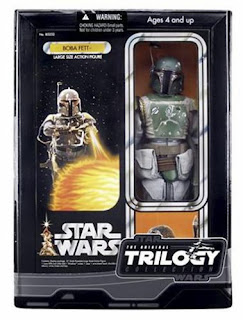 But because we're evil, we're going to make you work for it.

Tell us your best "Boba Fett Fact" in the style of "Chuck Norris Facts", e.g.
Only entries left in the comments of this post will be considered. Limit of THREE "facts" per person. Entries will be judged by DSPR and Crave.

Originality is key - if you just replace Chuck's name with Boba Fett's on some recycled facts, you won't win. And you'll also probably also receive a jetpack-powered roundhouse kick for your troubles.


In the meantime, make sure you check out Crave's Star Wars catalogue for some inspiration.
Posted by Robbie Boland at 1:52 PM